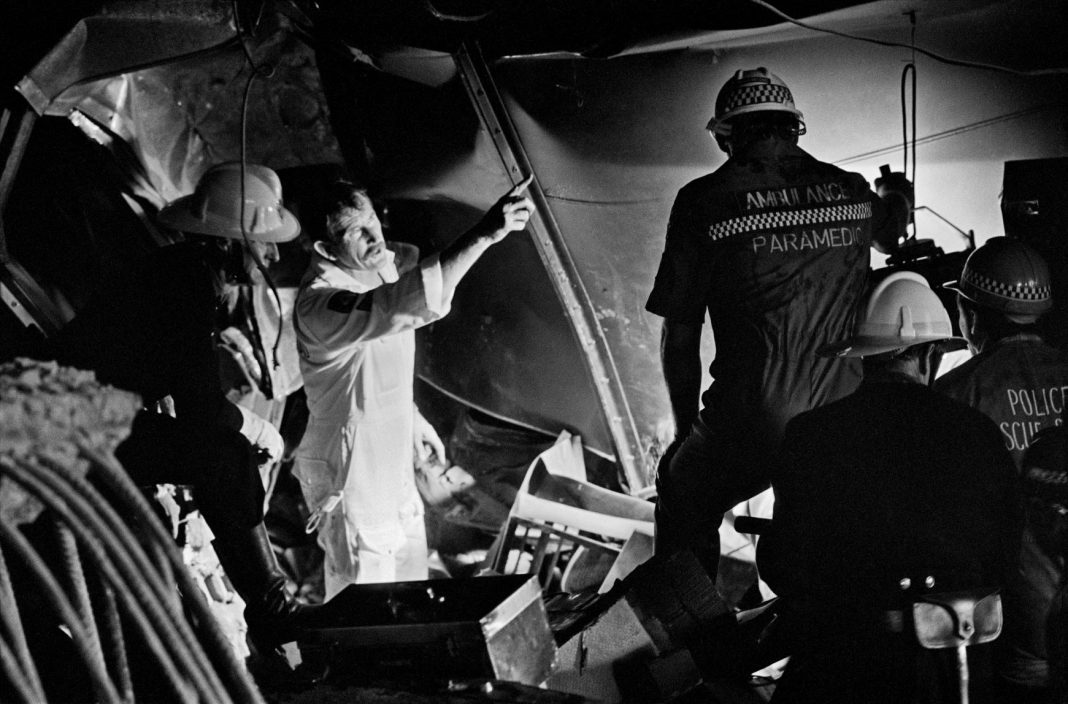 On 28 December 1989, one of the most serious natural disasters in Australia’s history struck Newcastle.

Photojournalist Steve Tickner was in his apartment at Parkway Avenue when an earthquake, which measured 5.6 on the Richter magnitude scale, hit at 10.27am.

“It was strong enough to throw me to the ground,” he told Newcastle Weekly.

“At first, I thought maybe it was a gas explosion and then I thought another air force jet had crashed into The Junction because that happened in the past.

“Then I realised what it really was.

“I picked myself up, grabbed my camera bag, and went out into the street.”

Mr Tickner hitched a ride with a couple who had been standing outside and arrived at Newcastle Workers Club.

After entering the club, he looked around the poker machine floor, walked across to the auditorium entrance, then spent time downstairs and in the car park.

He said the scene was “like a movie that you don’t think actually happens”.

“It was an enormously dangerous situation because everyone knows with earthquakes there’s always a strong chance of an aftershock, and that was not a building you wanted to be inside of if there was one,” he said.

“The poker machine floor was just covered in money – literally all the machines had spat out their entire contents – and a big beam had gone through the cashiers office and everything was spilled all over the floor.

“The rescue squad guys and police, they kind of knew me by sight.

“I’d been working in the area for years, so they left me alone and I stayed out of their way.”
Mr Tickner said emergency services started to cordon off the club about an hour after the quake struck.

However, he kept working inside and didn’t sleep for four days.

The earthquake claimed 13 lives, nine of whom were at the workers club; three people were also killed in Beaumont Street, Hamilton, while one died of shock.

Another 160 people were hospitalised, 50,000 buildings were damaged, and 300,000 people were affected, with isolated reports of movement up to 800 kilometres from Newcastle, and one aftershock was recorded on 29 December.

It left a damage bill estimated to be about $4 billion.

“On a global scale, it wasn’t particularly strong – there have certainly been far worse ones – but Newcastle was totally unprepared for it,” he said.

“The buildings weren’t even built with an earthquake in mind, so that’s where part of the problem came from.”

On the 30th anniversary of the shock, an exhibition at Newcastle ArtSpace, titled five.point.six: The Newcastle Earthquake, is featuring images captured by Mr Tickner, many of which have not been published or seen by the public.

The exhibition aims to look at the way Novocastrians responded to an unexpected natural disaster.

Mr Tickner said his photos highlighted the community working together.

“What impressed me the most, and what is reflected in a lot of the photos, is the willingness of people to get straight in and start working on the problem,” he said.

“It became apparent quite early that there were a lot of people still trapped under the rubble.

“The photos are of ambulance personnel, rescue services from up and down the Hunter Valley, the police rescue squad, the fire brigade and also civilians, who were all quite willing to get involved and help with the situation.”

The exhibition will be open at 91 Chinchen Street, Tighes Hill, until Sunday 22 December.

Visit newcastle.nsw.gov.au/library and go to ‘Earthquake Collection’ for more information and statistics on the disaster.