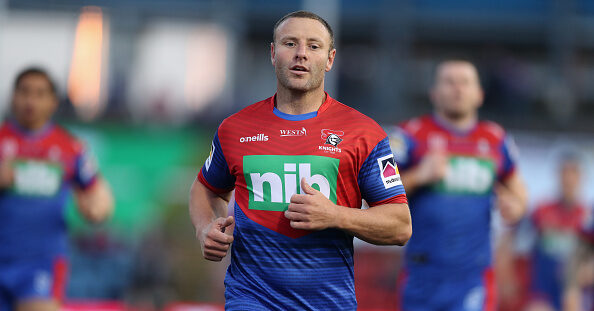 Knights’ side in doubt following round of ‘carnage’

Newcastle Knights’ coach Adam O’Brien is today being forced to consider who will make up his side’s spine due to the likelihood of a season-ending ACL injury to five-eighth Blake Green.

Green limped from McDonald Jones Stadium in the 18th minute of the 12-0 win over the Cowboys and is undergoing scans today.

“It’s not looking good, I feel like crying with him,” O’Brien said in a post-match interview.

“I’m getting used to it now though, I’ve had to do it a few times this year, it’s carnage.”

In Green’s absence, Phoenix Crossland shared the roles of hooker and five-eighth with Kurt Mann.

“He did a really good job in that number nine position for the amount of minutes he had to play, he’s never had to do that before,” O’Brien said.

“Just looking at him in the sheds he’s battered and bruised. He’s a young man and we expect him to hold his gloves up again next week for us.”

O’Brien said a meeting with the coaches would determine who makes up the spine for next week.

“We’ve got some options with young Mason [Lino] and Tex [Hoy]. We’ll see what we come up with.”

The win lifted the Knights to sixth on the ladder with five rounds to play.

If they continue their winning form, they could find themselves in the finals for the first time in seven years, but O’Brien said the milestone isn’t enough for them.

“If all we talk about is making the finals we have put a ceiling on ourselves straight away, so we will keep on playing week in week out and get ourselves in there.

“I don’t want to be content just being a part of it, let’s get in there and have a red hot crack.”

Newcastle led 6-0 at half-time after a Hymel Hunt try and a Kalyn Ponga penalty goal, which was followed by Mitchell Pearce receiving 10 minutes in the sin-bin for a professional foul just before half-time.

The Knights ran on with 12 men for the first 10 minutes of the second half, but Cowboys forward Mitchell Dunn was then also binned.

The Knights appeared to have scored twice through Herman Ese’ese and Lachlan Fitzgibbon in the 54th and 57th minutes, but both had no luck with the video referee.

Ponga kicked a penalty goal in the 63rd minute to take the Knights’ lead to 8-0, which he then followed up with a spectacular pass that put former Cowboy Enari Tuala across the line.

“I thought we honoured the jersey we were wearing definitely, we worked hard and kept climbing back up off the ground and finding a way to get it done for each other and had guys defending out of position, so I’m proud of their effort there,” O’Brien said.