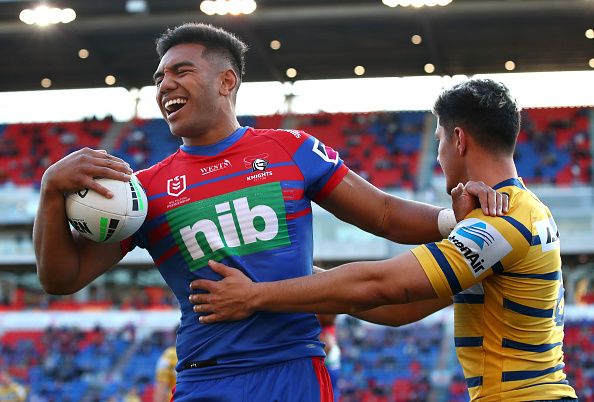 When the Newcastle Knights take on the Rabbitohs on Saturday, there’s one player who’ll be feeling the heat.

Hymel Hunt left a three-year stint at Souths to light up the Knights’ backline in 2019.

On the weekend, he’ll face off against some familiar faces.

“Every week I go hard no matter what but I’m still close to many of the guys so I’ll give them a lot of flack on the field,” Hunt said.

But the Newcastle centre says, despite his time at the Rabbitohs, he won’t have too much of an advantage.

“The squad is different, there’s different coaches and players to the team, however, there are tendencies that are the same during the game,” he said.

“It’s been very easy, I’ve come down with the attitude to enjoy what Newcastle is about, but there’s still plenty of work to be done,” he said.

“I think the lifestyle is great, I like the beach, I haven’t been able to do that in Brisbane and I now take my partner down for a swim in the afternoon which is nice.”

The 30-year-old says watching his old club struggle this season hasn’t been easy.

“I’ve got sympathy, because I know what the club means to the players and what they’ve put in. It’s difficult to watch,” he said.

Connor Watson and Mitch Barnett will return from injury in Saturday night’s clash, while Aidan Guerra will start in what will be his 200th NRL match.

Sione Mata’utia will be on the bench, while Jacob Saifiti has been promoted to the starting side with twin brother Daniel sidelined with a knee injury.

“I feel for the guy, he’s found some good form and it’s going to take the whole squad to get through this period,” McCullough said.

“With coronavirus, there’s no State of Origin or byes, so you never know what’s going to be called upon.”

Lifeline feeling the strain of the pandemic