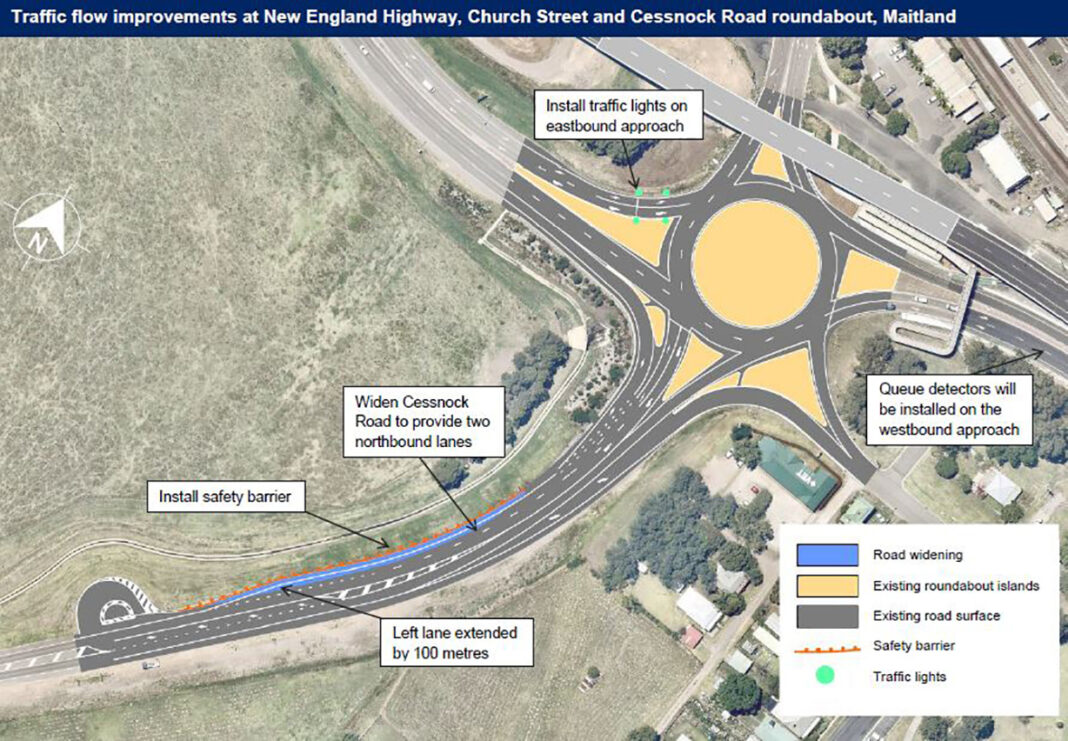 Traffic lights will be installed at the Cessnock Road and Church Street roundabout in Maitland to try and ease congestion during peak hour periods.

Parliamentary secretary for the Hunter, Scot MacDonald, said work on the $1.5 million project would start in April.

“The traffic lights are expected to better manage traffic in the afternoon peak by providing more frequent gaps between vehicles to allow westbound traffic to travel through the roundabout,” he said.

The lights will be installed on the eastbound approach, from the Rutherford direction, while traffic queue detectors are to be placed on the New England Highway, westbound entry, for motorists travelling from East Maitland, to act as triggers in the afternoon peak.

The roundabout will operate as normal outside of peak periods.

Work is also planned for Cessnock Road to extend the left land by around 100 metres to near the U-turn bay.

Roads and Maritime Services (RMS) states this will improve traffic flow and reduce the queue length on Cessnock Road in the morning peak by offering additional lane capacity for traffic travelling through to Church Street.

Liberal candidate for Maitland, Sally Halliday, said she was thrilled to see progress towards the congestion issues.

“While I have been out on the campaign trail speaking to Maitland residents, this has been one of the hot topic issues raised with me,” she said.

However, Maitland MP and Labor representative, Jenny Aitchison, said she informed the RMS of congestion issues when the roundabout reopened in 2016 and claimed the government told her there would be community consultation on the final solution.

“Now, the Parliamentary Secretary, who is not recontesting this election, has stepped in with the local Liberal candidate to make an announcement of money that is apparently already in the Budget, so not an election commitment, with no community consultation,” she said.

“It will be great if the traffic lights work, but my concern is that the Liberal and National government is doing its usual penny-pinching in our region.

“The end result is a $51 white elephant that has done nothing to fix the problem it was put in to address and people are having to wait in dangerous and lengthy congestion.”

The RMS states it will notify the community prior to work getting underway at the roundabout.