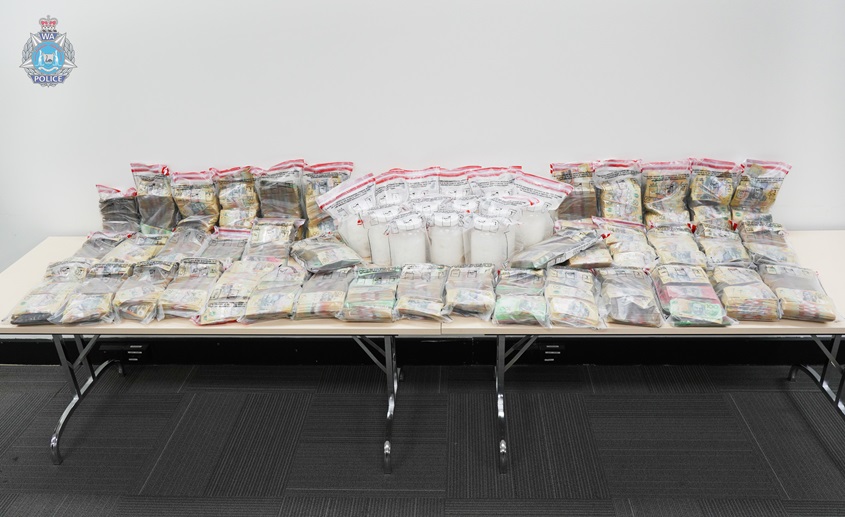 A 58-year-old man from Charlestown has been charged this week after about 13 kilograms of methylamphetamine and almost $4 million cash were seized in Western Australia last month.

On Monday 21 September, detectives from the Drug & Firearm Squad stopped a truck on Great Eastern Highway, near Sawyers Valley, not far from Perth.

The truck, which had entered Western Australia two days earlier, was searched and it will be alleged $3.88 million cash was located in two plastic tubs.

Police arrested the 58-year-old Charlestown man at the scene.

He was charged with Laundering Property/Money from Proceeds of Major Offence.

He was refused bail and appeared in the Midland Magistrates Court on Tuesday 22 September to appear in the same court yesterday, Tuesday 13 October.

As part of the investigation a search warrant was executed at a residence in Lord Street, Lockridge.

Detectives searched a Holden Commodore ute which was parked at the residence and it will be alleged two bags containing a total of 13 packages, each containing approximately 1kg of methylamphetamine, were located.

Another 29-year-old man from the area was arrested.

Three other men, a 26-year-old man and two 27-year-old men, were arrested during the course of the investigation and have been charged with separate drug offences.

Acting Assistant Commissioner Allan Adams from State Crime Command said the seizure was yet another example of the great work being done by detectives from the Serious and Organised Crime Division.

“The seizure represents the removal of 130,000 hits of meth from our streets, and is a significant win for our community,” he said.

“Illicit drugs, particularly meth, cause great harm to our community, to our families, and to the health of so many vulnerable members of our community.

“In this instance we have not only seized the drugs, we have seized a record $3.88 million cash.

“That is cash that would have made its way back to more senior members of a Serious & Organised Crime Group and would have been used to purchase greater quantities of illicit drugs and repeat the community harm cycle.”

Anyone with information regarding the manufacture or distribution of illicit drugs is urged to report the information to Crime Stoppers on 1800 333 000.